Welcome to Perfect Motion Touch, operators of touchrugby leagues across the East Midlands. We run mixed leagues in Nottingham across the whole year, with the addition of men's, women's and junior leagues in the Summer. We also organise dedicated competitions, including the Six Nations Touch Comp, the Corporate Games Touch and Nottingham Rugby Charity Touch. Whether you are new to the game of 'Touch', or have been playing for a number of years, playing Perfect Motion Touch is a great way to spend an evening after work. If you'd like to get in touch with us please drop us an email, or call us.

DUE TO THE CURRENT COVID-19 SITUATION, OUR SUMMER LEAGUES FOR 2020 ARE ON HOLD. WE ARE HOPEFUL OF GETTING SOME FORM OF PLAY DURING AUGUST, EVEN IF ON A MUCH REDUCED BASIS. WE'LL BE IN CONTACT ONCE WE KNOW MORE. MANY THANKS

Our Summer Leagues normally run from April to July and usually feature 3-4 taster sessions ahead of the leagues starting in May.

In 2019 we had 36 teams taking part, including eight under 15s teams in our Wednesday night junior league. Thanks to all the teams, referees and captains for making it such an enjoyable season. Congratulations to everyone, but especially our trophy winners below.... with The Gorgeous Pirates taking the prestigious Mixed Super League competition!

For a breakdown of the 2019 final results and standings, click here.

The 2021 Winter League will return on in January and run for ten weeks. There will be a taster session before the league starts. For details of fixtures, results and standings, click here.

For details of the final 2020 results and standings, click here.

Our Autumn Leagues run from September to November and usually feature two mixed leagues. We normally have one or two taster sessions ahead of the leagues starting for those new to the sport of touch.

All fixtures and results will be uploaded here.

For details of the final 2019 results and standings, click here.

Unfortunately, the Second Perfect Motion and Nottingham Rugby Six Nations Touch Tournament scheduled for Saturday 17th March 2018 had to be postponed due to waterlogged pitches. We are hoping to resurrect the competition in 2019, so watch this space!

Congratulations to Canterbury Coalescence who won the first Nottingham Six Nations Mixed Touch Championships on Saturday 11th March 2017 at The Bay Sports Ground, home of Nottingham Rugby. Coinciding with Nottingham Rugby's first ever Six Nations Beer Festival, five teams competed against one another, before the Grand Final on the show pitch. Canterbury came out on top, beating Touch & Go, Touchy McTouch Face and The Hotsteppers, as well as The Black Cats (twice), with a exemplarary 7-3 win in the final to secure the trophy and case of beer, courtesy of sponsors Greene King. 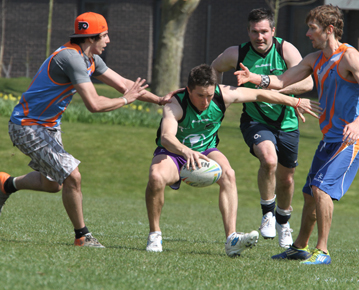 The Summer Touch leagues tapped off this week with 40 teams spread across six leagues. With two mixed, men's and women's leagues on Mondays; and juniors and social mixed leagues on Wednesdays, Summer Touch has most definitely returned.

Bees lead the way Bees lead the way in four of the six leagues after week 1, with Spanners and Hingoke topping the tables in the Men's and Juniors respectively. To view the latest league tables, results and fixtures click here.…